“Goods from Nuremberg travel all over the world”!

Ferdinand Kreutzer-Sabamühle GmbH celebrates this year its 150th anniversary: the “Hidden Champion” of the Franconian metropolitan region is Germany’s leading wholesaler of Starch products for the food industry. Nonetheless, our business rarely makes the headlines because aside from Guampa Energy Drink which is available for retail, most of the company’s activity is in the B2B sector of the food and beverage industries. Most people probably have products from Ferdinand Kreutzer-Sabamühle GmbH or our partners and suppliers on their table without realising, because we are active in every area: from sweets to baked goods, from the meat industry to beverages, pharmacy and other industries.

Our firm’s trading history spans 150 years in Nuremberg and the company has now reached the 4th generation under the lead of the Frank family. Managing Director Fabian Frank is at least as resourceful as our great-grandfather Fritz Frank, who even then enriched his Ferdinand Kreutzer Sabamühle GmbH not only with our Nuremberg “Secret Gingerbread Spice Nr. 32”, but also with a homemade, invented moth trap for which he also coined the slogan “Mottenkugel bumm – fliegt die Motte um”, “Put the moth ball in the corner – the moth will drop dead”. However, this invention was less successful than his secret gingerbread recipe, which is still used today in the traditional Nuremberg Christmas gingerbread cake. Fabian has further expanded and further developed the company, becoming the strongest starch supplier in Germany. Indeed, it is for this reason that wide-ranging personalities from the entire German starch industry attended the 150th anniversary celebration. This is what makes our company so special, a strong network in the starch industry: it is an exception in this sector to have all of the starch suppliers on board, and that ultimately makes us one of Germany’s strongest starch suppliers. Our customers and partners also appreciate the individual advice we provide on a range of topics such as batch-appropriate packaging of our products and free-of-charge delivery. So that they do not have to negotiate with several suppliers, our customers always have a permanent contact person.

The shareholders, formed by the 3 branches of the Frank family, are also directly involved in voluntary work in the region, for example in the honorary offices of the IHK, the association of LGAD (Fabian Frank), or the Association of Young Entrepreneurs, which Christine Sparvoli-Frank regionally runs in Nuremberg. Above all, Mr. Peter Frank is currently involved in the work of the IHK Specialist Committee, and his daughter Christine Sparvoli-Frank is also following in his footsteps by running for the first time this year for the IHK General Assembly, Election Group 9, for the wholesale and foreign trade position.

The guests of honour at the 150th anniversary celebration of our company were at least as varied as our assortment of products: they ranged from the worlds of comedy to robotics, from politics to industry and regional sports. 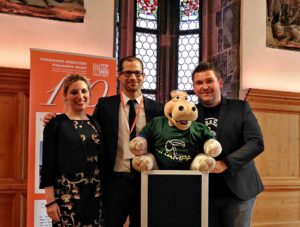 Other great guests who made the anniversary celebration a real highlight were “Sebastian Reich & Amanda”, the stars of the Franconian carnival. Amanda competed live on stage with Fabian for a job at the Ferdinand Kreutzer Sabamühle, making all the guests burst with laughter. The guests were also greeted by something modern in front of the historic wall of the old town hall: the little robot Pepper is also a fan of Amanda, and it was there to welcome our guests with a high-five, making everyone excited about making contact with the future of technology.

Thanks to the ingenuity of Fabian Frank, and the first energy drink he developed, Guampa, based purely on Stevia as well as, of course, the secret of starch, how should our company be different – were also renowned regional sports teams like the Ice Tigers, the EHC Erlangen and the Falcons, who are sponsored by us.

Thanks to Fabian’s ingenuity in developing Guampa, the world’s first energy drink based purely on Stevia (as well as starch, of course, what else could the secret ingredient be in our company?), renowned regional sports teams we sponsor, like the Ice Tigers, the EHC Erlangen and the Falcons were also able to attend the event and enjoy the entertainment with the other guests.